Learn how to play the notes of "O Come, All Ye Faithful" on violin for free using our animated scrolling tablature including sheet music and tab options for the easiest way to quickly learn the music. Enjoy playing along with 4 backing tracks which you can control with the track display. Use this tutorial with our tab to learn the song without having to read notes in sheet music.

On the scrolling tablature for O Come All Ye Faithful, there are both slurs and hooked bows. If you are not familiar with these, pay attention to the left side of the screen to see the curved white lines. Those indicate a slur, which means to connect the notes in the same bow direction with no stopping between. There are also times where two upbows are in a row. That tells you to hook the bow.   Play an upbow, pause for just an instant, and then play another upbow.

This Christmas carol is known by some by its Latin title, Adeste Fideles. It is also referred to by its English name, O Come, All Ye Faithful. No one is certain who composed the music unfortunately, but there is a strong case to be made that it was written by the King of Portugal, John IV (1604 - 1656), who was a highly skilled musician.
In a rather bizarre part of the history of this carol, the heavy metal rock band Twisted Sister recorded a version of O Come, All Ye Faithful for a Christmas album. The lead singer said that the carol was the inspiration for their biggest hit, We're not Gonna Take It. Listening to the two songs reveals that they are indeed very similar, despite being wildly differing styles. 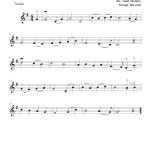 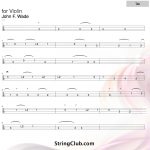