Learn how to play the notes of "O Come O Come Emmanuel" on violin for free using our animated scrolling tablature including sheet music and tab options for the easiest way to quickly learn the music. Enjoy playing along with 3 backing tracks which you can control with the track display. Use this tutorial with our tab to learn the song without having to read notes in sheet music.

This carol is a very simple piece that a beginner should be able to learn easily. Practice moving between regular 2nd finger and low 2nd finger because this melody uses low 2 on the A string. When you move the 2nd finger into the low position, be sure to not let 1st or 3rd finger to move lower along with the 2nd.
The only bow issue with this piece is that there are a few times you have to play a longer down bow and then a shorter up bow. When this happens, there is a risk that you will get stuck in the upper part of the bow since the longer down bow takes you there and the shorter up bow doesn't give you as much time to get back. Practice playing slower on the down bow and faster on the up bow if this is an issue for you.

This is a hymn for Advent and Christmas that was made popular when it was included in a collection called Hymns Ancient and Modern in 1861. This collection of hymns became so widely used throughout England that by 1895, it was being used by three quarters of English churches. Though there are other versions of the tune and text, the version included in Hymns Ancient and Modern is still the one most widely known through the English speaking world.
An unusual recording of O Come, O Come Emmanuel was made in 2012 by the Punch Brothers, a New Grass style group. New Grass refers to Bluegrass but with various modern elements mixed in, such as advanced jazz harmonies.
The most commonly known lyrics are:
O come, O come, Emmanuel,
And ransom captive Israel,
That mourns in lonely exile here,
Until the Son of God appear.
Rejoice! Rejoice! Emmanuel
Shall come to thee, O Israel. 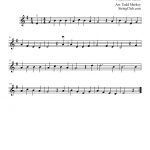 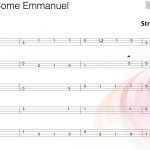