Learn how to play the notes of "Little Drummer Boy" on violin for free using our animated scrolling tablature including sheet music and tab options for the easiest way to quickly learn the music. Enjoy playing along with 4 backing tracks which you can control with the track display. Use this tutorial with our tab to learn the song without having to read notes in sheet music.

This is a very simple beginner level song with nothing technically challenging even for a beginner. A few things to watch for are the low 2nd fingers on the A string and the occasional bowing indications. The bowings are there mainly to ensure that the long notes at the end of each phrase will end with a down bow, making the long note easier to sustain for the full value.

Even though this carol is in D major, beginners should practice the G major scale. This is because when the notes go up to C on the A string, the composer chose to write a C natural instead of C#, as would be expected for D major. G Major 2 Octave Scale

Little Drummer Boy was originally titled Carol of the Drum. The composer says it was based on a Czech carol, but that carol has never been identified. The lyrics tell a story about a boy who is at the manger with the Magi and plays his drum for Mary and the Infant Jesus as his gift, since he has nothing to offer, unlike the Magi.
There have been a great number of recordings of this very popular carol by a dizzying array of performers. One of the more famous performances was by the surprising duet Bing Crosby and David Bowie. Other notable recordings were made by the heavy metal cello group Apocalyptica, The Brady Bunch, Stevie Wonder, and actor/musician Christopher Lee. 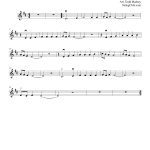 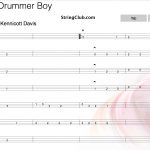