Learn how to play the notes of "Jingle Bells" on violin for free using our animated scrolling tablature including sheet music and tab options for the easiest way to quickly learn the music. Enjoy playing along with 3 backing tracks which you can control with the track display. Use this tutorial with our tab to learn the song without having to read notes in sheet music.

To make this song as easy to play for beginner violinists as possible, open strings were used instead of 4th fingers. If you are more experienced you can play some of the opens as 4th finger on the next lower string instead. This will make a smoother sound. Both of the times an open E string is used, substitute an A 4 instead if you'd prefer. Pay attention to the bowing marks on the left of the screen. Following them will make the phrases work out best.

This song is in G major, so to train your 2nd finger to play high on the D string and low on the A string, play the following exercises:
G Major 2 Octave Scale
G Major 2 Note Rhythms

Jingle Bells was originally titled One Horse Open Sleigh, but was later published under the title Jingle Bells, or the One Horse Open Sleigh. Later the original part was dropped and just Jingle Bells remained, probably because of the prominence of that line in the chorus of the song. The bells referred to in the lyrics are bells attached to horses that were used to make some sounds in order to avoid collisions due to the fact that a horse-drawn sleigh is nearly silent.
The chorus of the song has been changed over time and has a simplified melody and harmony.
This version of Jingle Bells uses the original harmony, which is a bit more complex than the version we hear almost exclusively today. The newer, more familiar melody is used so that people can enjoy playing the song the way that they know it now. 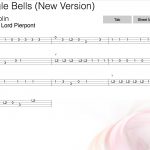