Learn how to play the notes of "Angels We Have Heard on High" on violin for free using our animated scrolling tablature including sheet music and tab options for the easiest way to quickly learn the music. Enjoy playing along with 3 backing tracks which you can control with the track display. Use this tutorial with our tab to learn the song without having to read notes in sheet music.

This arrangement of Angels We Have Heard on High is in the key of F major, which is not a key that beginner violinists usually play in. However, when reading off of tablature, even beginners should be able to learn the song without much difficulty. The key of F uses many low fingerings though so if you are a beginner, you should practice the scale until your finger placements become accurate. Also, pay attention to the slurs on the left of the screen. The white curved lines tell you to keep the bow going the same direction. At first, you can practice the carol without the slurs, but once you gain a basic familiarity with the notes, make sure to practice again with a focus on the bowing and slurs.

Angels We Have Heard on High Information

Angels We Have Heard on High was originally a French carol who's title translated as Angels in Our Countryside. The English lyrics that we sing today were written by James Chadwick in 1862 and are similar to the original French lyrics. It tells the story of the birth of Christ as told in the gospel of Luke, specifically the story of shepherds seeing a choir of angels singing the praises of the infant Christ child. 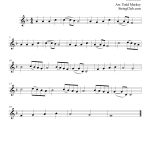 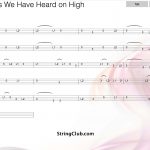 I've Been Working on the Railroad
Cripple Creek
Apples and Bananas
Dans a Carré
O Come, All Ye Faithful